Most important copyright cases of all time 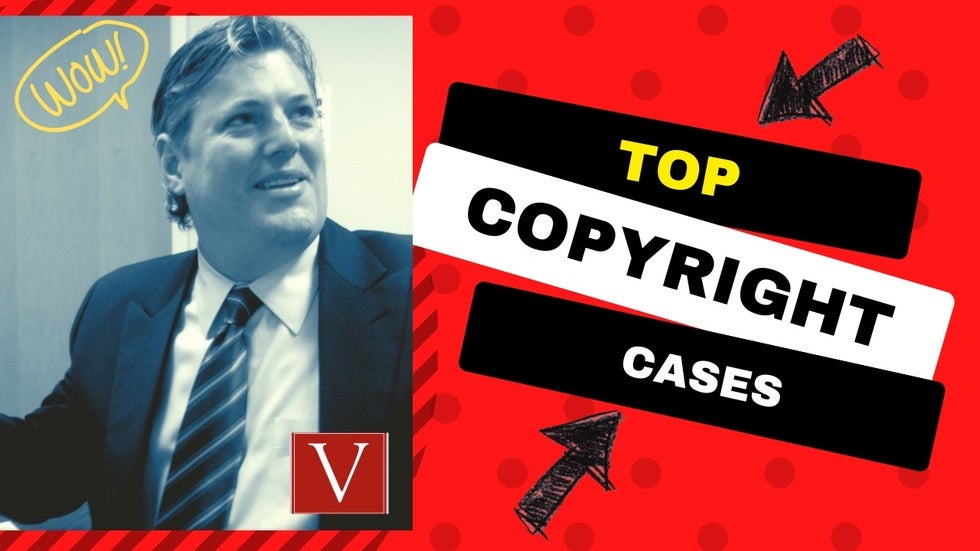 Here are some of the top copyright cases and what the cases stood for.

In MGM Studios v. Grokster (2005), the Supreme Court held that Grokster and other similar companies could be held liable for copyright infringement if they induce people to commit illegal copyright infringement. The Court found that although the technology used by Grokster and other similar companies was legal, when they actively induced people to use their technology to commit copyright infringement, they could be held liable for the resulting damages. The Court also held that the lower courts had abused their discretion by granting summary judgment in favor of Grokster, and remanded the case back to the lower courts for further proceedings.

Golan v. Holder (2012) was a United States Supreme Court case concerning copyright law. The case was brought by orchestra conductor Lawrence Golan, who challenged a provision of the Copyright Act of 1994 that removed certain works of foreign authors from the public domain and placed them under copyright protection. Golan argued that this provision violated the First Amendment, but the Supreme Court ultimately held that the provision was constitutional. The Court reasoned that the provision did not impose an unconstitutional burden on speech because the works were still available to the public, just under the protection of copyright law.

The Authors Guild et al. v. Google Inc. (2013) case was a lawsuit in which the Authors Guild, a trade organization representing authors, and several authors and photographers sued Google for making digital copies of books and displaying excerpts from them without permission. The court held that Google's use of copyrighted works was protected by fair use, and thus the authors and photographers did not have a valid copyright infringement claim. The court also held that Google Books was beneficial to society, providing easier access to books and promoting research and education.

The Bridgeman Art Library v. Corel Corporation (1999) case was a case of copyright infringement in which Bridgeman Art Library, a British-based copyright holder of images of artwork, sued Corel Corporation, a Canadian-based software developer, for distributing copies of Bridgeman's images without permission. The court found that Corel had infringed on Bridgeman's copyright and awarded Bridgeman damages. The court also ruled that simply scanning a photographic reproduction of a work of art was not enough to create a new copyrightable work, and that the underlying artwork itself was still protected by copyright. The case set a precedent that copyright holders of images of artwork have a right to control the use of the artwork, even when it is reproduced in digital form.

Campbell v. Acuff-Rose Music, Inc. (1994) was a landmark U.S. Supreme Court case in which the Court held that the fair use defense to copyright infringement applied to all types of works, including parodies, and did not require permission from the copyright holder. The case involved 2 Live Crew's parody version of the song "Oh, Pretty Woman" by Roy Orbison. The Court ruled in favor of 2 Live Crew, finding that their use of the song constituted fair use and did not infringe on the copyright of the original song. The Court noted the importance of protecting parody and other forms of creative expression, while still recognizing the rights of copyright holders.

Sony Corp. of America v. Universal City Studios, Inc. (1984) is a landmark Supreme Court case which established that the sale of home video recording devices does not constitute copyright infringement. The case revolved around Sony's Betamax VCR, which Universal City Studios argued was used to unlawfully copy their copyrighted works. The Supreme Court disagreed, finding that the sale of Betamax did not constitute copyright infringement as the device was capable of substantial non-infringing uses. This decision stands today as a cornerstone of fair use protection in US copyright law.

We have offices in San Francisco, Santa Monica, Newport Beach, and Phoenix, Arizona.  We handle a wide variety of copyright infringement matters including photo infringement, software piracy, TV signal piracy, counterfeit goods distribution, Strike 3 Holdings Defense, and other infringement matters.  Call us at (877) 276-5084 if you received a demand letter, notice of ISP subpoena, notice of summons and complaint regarding a federal court lawsuit or other legal document.  You can also email us your situation through our contact form.