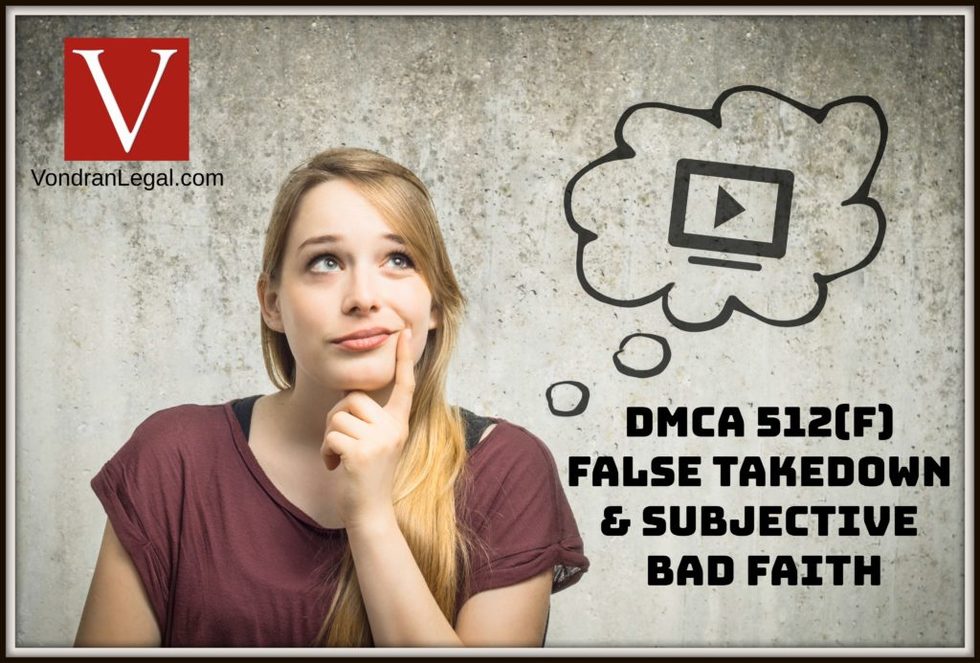 Many people are submitting knowingly false DMCA takedown claims on YouTube.  The DMCA law prohibits this type of bad faith conduct. However, proving it may be more difficult than you may think.  The Plaintiff filing a 512(f) misrepresentation claim may have a tough burden of proof, at least for now.  This blog discusses three fairly new cases in this area.

Anyone abusing the right to file DMCA takedown notification by submitting meritless claims of infringement to service providers, however, may be subject to liability under Section 512(f), which provides in relevant part that:

(1) knowing and material misrepresentation that copyright infringement has occurred by the one filing the DMCA takedown notification;

(2) the alleged infringer relied on such misrepresentations;

(3) injury to the alleged infringer as a result.

Here is a case (not from the 9th Circuit, but from New York).

Defendants' Counterclaim Based on Plaintiffs' “Take-Down” Notices to eBay Plaintiffs move for summary judgment on the Lavenders' remaining counterclaim. It alleges, under 17 U.S.C. § 512(f), that plaintiffs, through counsel, in sending “takedown” notices to eBay, knowingly and materially misrepresented, in bad faith, to eBay that the Lavenders' posting of works for sale on eBay was infringing a Stern copyright, when plaintiffs knew it was not. The facts underlying this claim are largely undisputed, as they are drawn from correspondence.  On February 7, 2017, plaintiffs' counsel, representing the Bert Stern Trust, submitted takedown notices of infringement to eBay, pursuant to the DMCA, Pub. L. 105-304, § 202, Oct. 28, 1998, 112 Stat. 2860 (codified at 17 U.S.C. § 512(c) ). Counsel claimed that several listings the Lavenders had posted, which offered to sell original or Modified Prints, infringed Stern's 2013-registered copyright. Counsel's notices initially designated eBay's “reason code 4.2” as the basis for asserting infringement. That code connotes that the “[l]isting contains [an] unlawful copy of [a] copyrighted image.” An email exchange with eBay followed. Explaining the reason-code designation, plaintiffs' counsel stated: “The items are a limited edition print of a copyrighted photograph and are works of visual art. The uploading and public display of these items on eBay constitutes copyright infringement without regard to whether the item is counterfeit or not. No one can photograph these items as that too would constitute copyright infringement.” JSF Ex. 13B. An eBay official responded that the reason code was incorrect, and that if counsel's “concern [was] with the product being sold,” the Trust needed to submit a revised notice with a reason code related to “copyright-item infringement.”  Id. Plaintiffs' counsel thereupon changed the designated reason code to code 6.1, a residual category for “other” types of infringement. JSF Exs. 13B & 14. Alongside that entry, on each notice, plaintiffs' counsel wrote, “copyright infringement: Unauthorized reproduction and public display of an item protected by copyright.”  Id. Ex. 14. The Lavenders' counterclaim here is under § 512(f), which makes liable a person who “knowingly materially misrepresents” to a service provider “that material or activity is infringing.” 17 U.S.C. § 512(f). Relevant here, it is a complete defense to a claim under § 512(f) that the party issuing a takedown notice had a subjective good faith belief that the use in question was “not authorized.”  Hosseinzadeh v. Klein, 276 F.Supp.3d 34, 44 (S.D.N.Y. 2017). (“A copyright holder is not liable for misrepresentation under the DMCA if they subjectively believe the identified material infringes their copyright, even if that belief is ultimately mistaken.”) (citing  Lenz v. Universal Music Corp., 815 F.3d 1145, 1153 (9th Cir. 2016) ). The evidence here uniformly supports plaintiffs' defense of good faith. And critically here, the Lavenders have not supplied a factual basis on which to find the opposite: that plaintiffs, in pursuing takedown notices, made a knowing material misrepresentation. Plaintiffs' claim of copyright infringement in connection with the Lavenders' offer to sell Last Sitting photographs and Modified Prints was clearly colorable. It tracks the infringement claims that will proceed to trial in this lawsuit. And while the facts as to whether the late Stern had given away certain items and authorized certain posthumous actions are disputed, the Trust had sound reason to conclude that he had not done so and that the Lavenders do not own the objects they were offering for sale. If so, the Lavenders' display of photographs of those objects incident to the offer of them of sale would necessarily violate plaintiffs' copyright (as those displays would no longer be fair use because they would not be in service of lawful sales). For the Trust to assert this position did not evince bad faith or entail the making of a material misrepresentation. Further, as to the “reason code” that plaintiffs' counsel came to use, counsel's written exchange with eBay reflects that counsel accurately recited plaintiffs' theory of infringement to eBay, and then relied on eBay's instructions as to the code to use. The Court therefore enters summary judgment for plaintiffs on the Lavenders' counterclaim.  See, e.g.,  UMG Recordings, Inc. v. Augusto, 558 F.Supp.2d 1055, 1065 (C.D. Cal. 2008),  aff'd, 628 F.3d 1175 (9th Cir. 2011). So there seem to be a few observations that can be made about a DMCA 512(f) “bad faith” takedown or counter-notification at this juncture: 1.   Plaintiff (or Counter-Claimant) should be able to get by a motion to dismiss the lawsuit alleging bad faith takedown if it properly pleads the knowing misrepresentation being made in bad faith and that no reasonable copyright owner would have believed in the good faith of the action taken   2.  Defendant appears to have a defense of “subjective good faith” that they can raise   3.   Plaintiff may be required to disprove the defense (i.e. to show some evidence that the subjective intent is objectively unreasonable or not bona fide or was in bad faith). This makes 512(f) claims very interesting.  We will continue to track these cases in the 9th Circuit and elsewhere.

If you need help with social media legal issues including copyright infringement claims, DMCA claims, cease and desist letters, infringement notifications and counter-notifications or need to file a federal court lawsuit seeking an injunction (or are responding to an injunction or TRO), contact us to discuss your case at (877) 276-5084.  We are a boutique intellectual property and entertainment law firm focusing on copyright law in the United States.