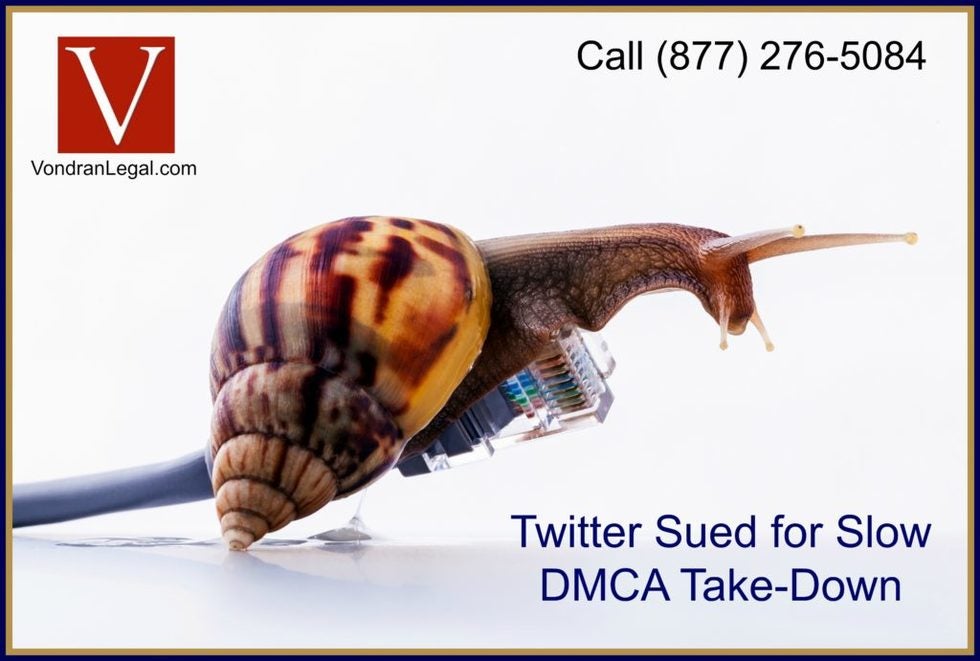 This is a case involving the Digital Millennium Copy Act (“DMCA”).  The Case was filed by FARRIMOND LAW OFFICES (San Francisco) in the Northern District of California (federal court) in 2017.

Sample Allegations in the Complaint

Here are a few of the legal allegations made in the complaint:

“Twitter operates an Internet-based service that allows its users to send 140-character messages through Twitter's website and mobile site, client applications, or third-party applications. Twitter calls its 140-character messages “Tweets.” Tweets can contain a link to a video or image that is either hosted on Twitter's servers, or on third-party servers. Twitter has thousands of users in this District, including individuals, corporations, and government entities. Hundreds of thousands of Tweets are sent to and from this District every month. 12. Beginning on or about March 18, 2017, a Twitter user (“KJ”) copied and attached the Copyrighted Photograph to a Tweet with the text, “Happy Birthday XXXX. My world wouldn't be the same without you, as I dance to your music just about every day.”  KJ copied the Copyrighted Photograph without license or permission from Pierson.”

The Plaintiff seeks the full range of remedies against Twitter including statutory damages of up to $150,000 plus Attorney Fees.

Here is some various federal law on the topic of DMCA safe harbors:

“This case turns in large part on whether MP3tunes is eligible for protection under the safe harbors created by the Digital Millennium  Copyright Act (“ DMCA”), 17 U.S.C. § 512. The  DMCA seeks to balance the interests of  copyright owners and online service providers by promoting cooperation, minimizing  copyright infringement, and providing a higher degree of certainty to service providers on the question of  copyright infringement.  See  ALS Scan, Inc. v. RemarQ Communities, Inc., 239 F.3d 619, 625 (4th Cir.2001). Toward that goal, the  DMCA provides certain safe harbors (i.e., limitations on remedies for  copyright infringement), but only to qualifying service providers. As courts have emphasized, “[t]his immunity … is not presumptive, but granted only to ‘innocent' service providers ”  ALS Scan, 239 F.3d at 625. Moreover, the  DMCA's safe harbors, as with all immunities from liability should be narrowly construed.  United States v. Texas, 507 U.S. 529, 534, 113 S.Ct. 1631, 123 L.Ed.2d 245 (1993);  see also  Fame Publ'g Co. v. Ala. Custom Tape, Inc., 507 F.2d 667, 670 (5th Cir.1975) (statutes that provide exceptions to liability under the  Copyright Act should be strictly and narrowly construed). EMI argues that MP3tunes is ineligible for protection under the  DMCA because it (1) failed to reasonably implement a repeat-infringer policy by not identifying users who had sideloaded works identified in EMGNA's and EEW's  takedown notices; (2) failed to act expeditiously to remove the sideloaded works identified in EMGNA's and EEW's  takedown notices; (3) ignored red flags of widespread infringement; and (4) controlled and benefitted from the infringing activity.” The case also discussed:

“The key terms “reasonably implemented” and “repeat infringer” are not defined in the DMCA. Courts have held that implementation is reasonable if the service provider (1) has a system for responding to takedown notices, (2) does not interfere with the copyright owners' ability to issue notices, and (3) under “appropriate circumstances” terminates users who repeatedly or blatantly infringe copyrights. See Perfect 10 v. CCBill, 488 F.3d 1102, 1109–1110 (9th Cir.2007). The purpose of subsection 512(i) is to deny protection to websites that tolerate users who flagrantly disrespect copyrights. See Corbis Corp. v. Amazon.com, 351 F.Supp.2d 1090, 1100–01 (W.D.Wash.2004). Thus, service providers that purposefully fail to keep adequate records of the identity and activities of their users and fail to terminate users despite their persistent and flagrant infringement are not eligible for protection under the safe harbor. See CCBill, 488 F.3d at 1110; see also In re Aimster Copyright Litig., 252 F.Supp.2d 634, 659 (N.D.Ill.2002) (service provider ineligible for safe harbor where users' data was intentionally encrypted, making enforcement of non-infringement policy impossible). On the other hand, service providers have no affirmative duty to police their users. See CCBill, 488 F.3d at 1111. In cases of video and file sharing sites, courts have found reasonable implementation where service providers terminated the accounts of users who had been warned yet continued to upload material that had been the subject of a takedown notice. See, e.g., UMG Recordings, Inc. v. Veoh Networks Inc., 665 F.Supp.2d 1099, 1117–18 (C.D.Cal.2009).

(c) Information Residing on Systems or Networks At Direction of Users.— (1) In general.—A service provider shall not be liable … for infringement of  copyright by reason of the storage at the direction of a user of material that resides on a system or network controlled or operated by or for the service provider, if the service provider— (A) (i) does not have actual knowledge that the material … is infringing; (ii) in the absence of such actual knowledge, is not aware of facts or circumstances from which infringing activity is apparent; or (iii) upon obtaining such knowledge or awareness, acts expeditiously to remove, or disable access to, the material; (B) does not receive a financial benefit directly attributable to the infringing activity, in a case in which the service provider has the right and ability to control such activity; and (C) upon notification of claimed infringement as described in paragraph (3), responds expeditiously to remove, or disable access to, the material that is claimed to be infringing or to be the subject of infringing activity.