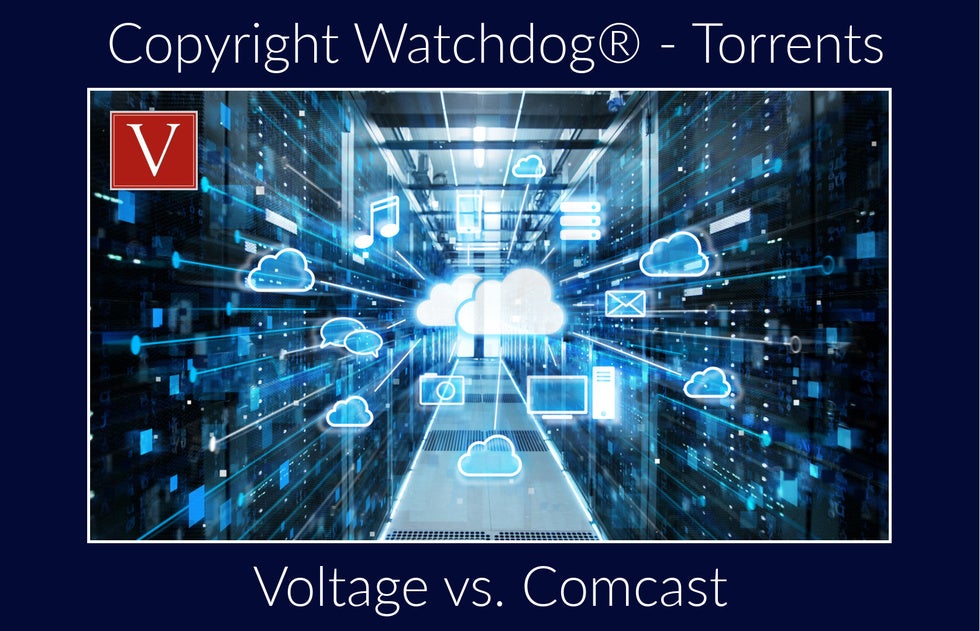 The world of online Torrent infringement is heating up once again. Following similar lawsuits against Verizon and AT&T, Comcast is now being sued for alleged copyright law violations.  Plaintiff's allege that Comcast is failing to enforce its DMCA copyright policy to terminate repeat infringers, and thus, that they are liable for contributory and vicarious infringement of its users.  They claim the infringement notices were not forwarded, and no action was taken against repeat infringers unless there were two or more notices in a month.  There is also a claim that 1202 (CMI) copyright management information was removed resulting in a further DMCA copyright violation.  Comcast is or will be denying the accusations.

Allegations in the lawsuit

Here is a basic overview of some of the allegations made in the lawsuit recently filed in Pennsylvania Federal Court.

To download a film using BitTorrent technology, a user needs to obtain a torrent file. A user can find and download a torrent file for pirating a particular movie from a torrent site. A torrent site is a website that indexes and provides torrent files for download. Examples of torrent sites are RARBG, 1337x, The Pirate Bay, OxTorrent, and YTS. The United States Trade Representative has listed YTS and RARBG as examples of online marketplaces that engage in and facilitate substantial piracy.....

Plaintiffs engaged data providers such as Maverickeye UG (“Maverickeye”) to identify the IP addresses that were used to engage the BitTorrent protocol and pirate copies of Plaintiffs' Works.

Maverickeye used forensic software to enable the scanning of peer-to-peer networks for the presence of infringing transactions. Maverickeye extracted the resulting data from the investigation and isolated the transactions and IP addresses associated with the files identified by their hash values. Maverickeye logged information including the IP addresses, the hash values, and hit dates (access or use dates) that show that users of Comcast's internet services engaged BitTorrent to download and distribute copies of Plaintiffs' Works. For each of the Works, Maverickeye verified that a full file distributed and downloaded in this process contained a digital copy of a motion picture that is identical (or alternatively, strikingly similar or substantially similar) to one of Plaintiffs' Works. Maverickeye verified that the IP addresses were allocated by Comcast using publicly-available information from ARIN.

Comcast knew, had reason to know, or was willfully blind to, its users' direct infringements of Plaintiffs' Works.

The Notices gave Comcast knowledge of specific instances of third parties' infringements of Plaintiffs' Works using Comcast's internet services. In the alternative, these Notices gave Comcast reason to know of specific instances of infringements, or alerted Comcast to the high probability that Comcast users infringed Plaintiffs' Works, and Comcast deliberately avoided confirming that fact. If Comcast had any doubt as to the truth of these infringement notices, it could use the information contained in the Notices to investigate and verify the infringements.

For example, Comcast could have obtained the torrent file for downloading a movie, using the infringing file name contained in the Notices, and opened the file in a BitTorrent client to view information about the file, such as the infringing file's unique hash value. Comcast could use this unique hash value to confirm that the file contains a copy of one of Plaintiffs' Works. For example, Comcast could have obtained data packets of the traffic from the IP addresses recorded in the Notices and verified that they contain copies of one of Plaintiffs' Works.

Despite knowledge of specific infringements, Comcast continued to provide infringing accounts with services essential to infringement.

As alleged above, Comcast knew, had reason to know, or was willfully blind to, copyright infringements using internet service and IP addresses provided by and controlled by Comcast, including knowledge of repeat infringements from Comcast IP addresses.

But Comcast did not take meaningful action to prevent ongoing infringements by these Comcast users. Comcast failed to terminate the accounts associated with these IP addresses or otherwise take any meaningful action in response to these Notices.

Comcast often failed to even forward the Notices to its internet service customers or otherwise inform them about the Notice or its contents. 88. Instead, Comcast continued to provide the internet access and services necessary for users to commit further online piracy. Comcast continued to provide access to the internet from the IP addresses that infringers used to pirate movies.

The provision of these internet services is an essential step in the third-party infringements, and substantially magnifies the underlying infringements.

The torrent sites alleged to be used by customers include:

Other Plaintiff's in the lawsuit

Here is the full list of Plaintiffs who have joined in the lawsuit:

Our Copyright Defense Law Firm has handled hundreds of cases, both in and out of federal court alleging DMCA violations, Direct, contributory and vicarious copyright infringement, 1202 CMI violations, BitTorrent illegal downloads, photo infringement and other copyright claims.  In fact, Vondran Legalr was identified by Unicourt.com as the #1 copyright infringement defense law firm in 2020, 2021 and we are poised to repeat in 2022 (in terms of number of federal copyright cases handled).  We have appeared in over 330 federal court infringement matters.  If you receive a ISP subpoena, notice of infringement, photo infringement demand letter, software audit demand letter, or Strike 3 Holdings lawsuit, call us to discuss at (877) 276-5084.  You can also fill out our contact form and we will contact you.  When it comes to this area of law, there is no substitute for hiring the best copyright and technology lawyer possible.